With a help of dentist-mirror I was able to locate a spot in the right slide rail in the gun frame. A small dent have started to form in the aluminium frame. Apparently the slide have been hitting it.
It’s hard to notice this dent as it is in a blind spot and when cycling the gun by hand the force is coming form the lever and the slide is being pulled by bolt and not the gas piston.
When cycling the gun by hand the slide is bent away from the dent and it cycles easily, but when force comes from the far end of the slide, from the gas piston the slide is being pushed evenly backwards and then slide keeps hitting the gap in the rail right after the shell eject hole.

I found it extremely difficult to file down the dent and smooth the opening of the rail in the frame so I ended up filing the corners in the slide.
It took me 2 hours to find and figure out the reason for this dent and why I cant reproduce the slide hitting the rail opening while cycling the gun by hand.
Then it took me 5 minutes to file slide corners round and smooth. And after a quick lubrication I was ready to test-fire my modifications. 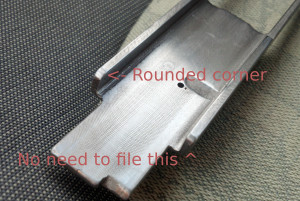 Before sending my gun to repair it would not cycle any ammunition. Now my Baikal won’t cycle snap caps, everything else goes.

After I confirmed that my modifications were super effective I ended up polishing the whole slide with 600- and 2000 grid sandpaper. Just because the the corners I filed looks so shiny and smooth compared to any other surface in the slide.

The following is my speculation:
The root cause for this sudden lack of operation might have been because the slide in my gun is even so slightly deformed and bent to “right” (if you look the gun from top the barrel facing forward the rear side of the slide is turning slightly to right). And after a while the slide kept graving hole and dent in the frame where the right side rail begins after the shell eject hole. After some while (around 1000 rounds) the slide started slowing down considerably and eventually lead to a situation where the gun did not cycle at all.

I don’t know why the gun worked perfectly when the importer shot it? They could have shot it with some extra powerfull rounds at first to cause the dent to deform temporarily. Now that I’ve filed the slide I don’t see any reason why it would start craving another hole in the frame.