After I purchased my SLB holster I immediately throw away my crappy kydex holster I had for my KJW KP-09 CZ-75 Action Air pistol. (KJW stands for Kuan-Ju-Works.)

Only problem is that in SLB quick draw holster the pistol is held in place from the front picatinny rail (present CZ-75 SP-01 Shadow) which obviously my Action Air pistol did not have.

One viable solution would have been to purchase older style SLB front support part, but I don’t feel comfortable screwing and unscrewing that part every time I’d change from ActionAir to Shadow.  And I really like the picatinny solution for Shadow so I had to figure out another solution.

After 1 hour of brainstorming and many nearly-cut-myself-with-knife -situations later… meet the DIY Action Air support for  SLB! 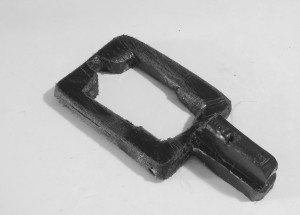 Pardon the grinding marks, but the tools I used to make this out of PE plastic were: knife, sandpaper, file and tears (I have all of my tools elsewhere, so I had to live with what I had in hands) When I have opportunity I will give this part a quick heatgun treatment to melt all plastic lint and scratches away.

I can attach and detach this part in seconds and because it is sitting tightly between aluminium support and the original picatinny holder it won’t move anywhere. 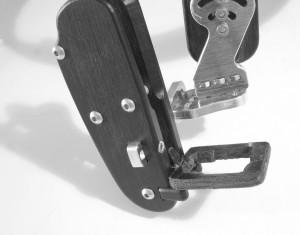 And final picture with my trusty Action Air CZ-75 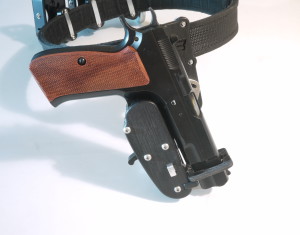 END_OF_DOCUMENT_TOKEN_TO_BE_REPLACED

There seems to be some different interpretations about shotgun rule 5.3.2

Unless otherwise specified in the written stage briefing the competitor’s equipment belt carrying cartridges
(in caddies, loops, clips, bags or pouches) and/or detachable magazines and/or speed loaders must be worn at
waist level. “Chest-rigs”, bandoliers and similar carriers are expressly prohibited. Additional ammunition
carriers mounted on forearms are permitted provided that cartridges are carried individually in loops or clips.

So it should be legal to hold load-2 or load-4 modules in your forearm as the cartridges are held individually in clips.

END_OF_DOCUMENT_TOKEN_TO_BE_REPLACED

Got a call from the dealer. Gun was returned back to them “fully functional” with a hefty bill for “out of warranty repair”

Update: There was a “minor” misunderstanding. In the end I had to pay 140 euros for nothing.

What the… what?! Oh just because I’ve added larger knob to slide release button the gun is now clearly out of warranty. Why do I have a feeling that if I go and test shoot this gun it will failure to feed?

Quick recap: Before sending the gun to warranty repair I cleaned the gun and for the sake of clarity adjusted the gas nut back to it’s factory default setting. I ended up paying 140 euros for them to lube, test-shoot and turn the gas nut one revolution in (where it oh-so-conveniently was before I adjusted it back to default settings)

If the gun will failure to feed I’ll have 3,5 kg worth of assorted metals for sale. (disclaimer, this scrap metal will require a valid purchase permit for *giggle* semi-auto 😀 shotgun)

Editing IPSC Minirifle SM 2014 and one stage turned out maybe a little bit too multicam switching..

Today I got a call from someone who I think was the importers gunsmith.

He started the call by questioning me whether I knew that Baikal MP-153 needs some adjusting in order to cycle reliably. He also reminded me that guns need oil and my gun was way too dry to operate.

He was not implying that I might have neglected some maintenance with the gun. He was directly saying how I have not cleaned then gun, how I have no clue that slide surfaces needed oil and how I clearly have absolutely no idea of anything.

It made me wonder that next time I’m taking my gun to a gunsmith I probably should not clean it at all and soak it in oil. Happy gunsmithing with crap dripping piece of metal. But no. Next time I have problems with guns I’ll just recall my experiences with “professional” gunsmiths and use it as a reason to purchase a new gun. Fuck this. New Baikal costs 400 euros and I’ve used more than 20 hours cleaning, adjusting, lubricating and wondering what the hell is wrong with this gun. I might not use a gunsmith ever in my life. I’ve looked and helped my dad gunsmithing the shit out of every gunpowder operated machine for the last 25 years. With that experience I claim that there is absolutely no need for me to listen “trusted gunsmiths” telling me over phone how to turn a nut clockwise or apply oil.

This revealed me one thing. If the gun arrived dry to the second gunsmith then the first gunsmith did nothing.

This last gunsmith only oiled the gun and “adjusted the gas system” of course he had to remind me more than 10 times how it is important to adjust and lubricate the gun. He did have one good idea though. He told me that it’s a good idea to leave the gas seal ring gap to the opposite side of the gas port so that the discharging gas would not leak trough the gap immediately.

Funny thing. I’ve made no claims that the gun must cycle with 24g loads. I’d be perfectly happy if the gun would cycle with 28g loads. Yet the gunsmith gave me a speech how this is a hunting gun and told me in degrading tone that it’s a fools business to think that this gun would work with skeet and/or trap loads.

Am I living in some sort of reality distortion field? Because first he tells me how he tested the gun with 24g skeet ammunition and the gun cycled perfectly and how I told that I’d be just happy if the gun would cycle with 28g and heavier ammunition. What a mess.

Oh and importer washed one’s hands of the warranty because I’ve changed the magazine tube and bolted a aluminum washer on the slide release button. Now I’ve lost the track. I don’t know where my gun is or who is going to pay the expenses. I’d just want my gun back now.  I’ve learned my lesson not to seek help if in trouble.

Newcomers might want to read the first part of the story here
http://special.squad.fi/baikal-mp-153-nonsemiautomatic-shotgun/

I got a call from the dealer.

Did I not explain how the gun was intentionally left dry so that the gunsmith could inspect it and lube as he wishes.

END_OF_DOCUMENT_TOKEN_TO_BE_REPLACED

There was once this Russian made Baikal MP-153 that used to work. One day it stopped loading new shell in chamber. After multiple dissassembly-assembly and careful inspection no-one could find the reason for the sudden lack of operation. Then gun was shot around 1000 rounds by then and it was no more than 6 months old and clearly under warranty so it was sent to the dealer.

I’ve never sent a gun with courier company before so I called the day the gun should have arrived at the dealer. “It’s the Baikal that shoot only full auto right? We received it yesterday” was the answer I got. Apparently they were unable to fulfill my request if they could just combine the faults of these two Baikals after mine have arrived. I could not help thinking about full auto shotgun. Usefulness 0, but such fun.

END_OF_DOCUMENT_TOKEN_TO_BE_REPLACED

Unfortunately one Estonian shooter was superior and won all three component matches (although shot one of them in Open division as the tournament in question allowed shooters to compete in non-3gun division in one match) and thus won the Standard division 3gun with 300 points. Second and third had 235.39 and 235.31 points.

Special Squad got one silver medal from shotgun component match. Unfortunately the longest stage in the shotgun competition was cancelled and this might have been the reason for not getting more medals!